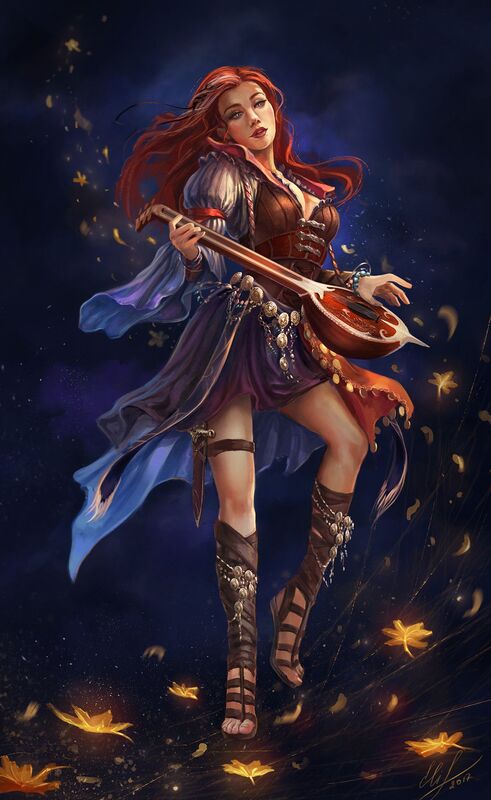 The Principles of Bard Magic:
1. It is different from other forms of magic.  Bards cannot receive spells from the Gods nor can they cast spells learned from magic user scrolls.
2. Bardic magic is an outgrowth of their talents and the two are tied together.  Troubadours need to be both highly musically talented and have the spark of bardic magic potential.
3. Bards persuade the elements of magic to 'perform' with them.   The High Bard Owen Dearnwood described it as, "Inviting the magic to come out and dance."  Bards must perform in some fashion to utilize the magic.
4. Spells are not only natural outgrowths of the bard's talents (e.g. a musician who manipulates sound by using magic); but it is also easier if the bard can persuade the magic to be part of the experience as a partner (by using appropriate music/performance for the situation: sympathetic music for healing, a lullaby to cause sleep, a mocking tune to cause discomfort or embarrassment to an enemy....).  The High Bard Gavin the Lithe explained it as, "The Gods tell the magic what to do.  The magic users force the magic what to do.  If you were the Magic, wouldn't you be heartily sick of it!  We invite the magic along to be our partner.  I know the Learned say magic is a force and it has no soul nor personality.  But, I know, that it seems to me that if I invite it to help me play a trick on an enemy or to help me heal a dear friend or to be part of a performance; that it seems to enjoy being asked and part of something where it gets to decide, have a power of its own, and to be its own person!"
While bardic magic is knowledge almost completely in the hands of bards, those magic users who have some knowledge of the topic tend to dismiss the bard's theory of magic as fanciful.  Of the few magic users who believe the bards may be correct, it is interesting to note that all have adventured extensively with bards.  A few rumours surround these adventures of bardic magic meant to assist a party member directly not working as well or unpredictably on other magic users, especially arcane magic users...
5. Bards need to persuade the magic to be ready, stay ready, and to help them.  A bard's performance skill and how the magic is used will sometimes affect the potency of the spell....  See specific spell effects for details.


Preparation: Sense and Summon Magic
Bards have an innate ability to sense the magic around them and persuade it to power spells.    This process has 3 steps:  First, usually during a long rest, the Bard concentrates for 30 minutes while doing a quiet performance.  During this time, the magic that is locally available will gather around the Bard.  The Bard will be able to discern the following things about the magic:  1. Strength:  non-existent, weak, average, strong, overbearing .   Average is by far the most common.  There is normally a reason why it is not average…..  2.  Nature of the magic:  cooperative, indifferent, hostile.    Second,  the Bard may choose to make a Lore check for additional information.  The DM makes the roll in secret and supplies information based on the roll (success gives +1 to stage 3, failure -1.  The DM may give background information at this point – possible reason why the local magic is non-existent or hostile, etc…).  Third, the Bard makes a Performance check to get the magic’s cooperation.  Before the check, the approximate DC is supplied by the DM.   (Failure = no magic and Bard needs to try in a new spot, Success = magic will help Bard,  Critical Success=1 spell of the Bard’s choice is augmented - usually extra damage or range or duration...) .
Note: In very rare cases, the magic is very self-aware.  The DM will warn the Bard of this situation in vague terms upon the sensing magic stage.  The Bard may choose to continue, stop, run away at this point, …..  If the Bard continues, he/she will then be in negotiation with the self-aware magic.  That situation may be extremely good or extremely bad……  In either case, the magic will expect something from the Bard and his/her companions  - service/assistance, ….. their souls.  Bards should really hesitate before negotiating with an evil self-aware magic of overbearing strength!


Casting:
Having succeeded in persuading the magic to 'come along for some fun', the Bard can cast his/her spell.  Examine each spell for the components to cast it (usually just performance/verbal). In addition, sporadically as time or travel goes on, the Bard will need to do some sort of performance to keep the magic interested and 'on-board'. (Yep, I'm going with the Bard and we're going to do this really cool spell that will be a good joke on.... 'Squirrel!'  Wonder where the squirrel is going....).  The ordinary/average magic you will deal with most of the time is not very self aware……  As you were warned, Bard magic is not like Cleric or Mage magic..... But, it has some interesting angles the other classes do not have access to.... To simplify play, players may assume that each 'gathering' of magic provides enough magical power for a bard to cast all of her spells.  Exceptions will be noted by both the GM and the player of the Bard.


Prerequisites:
Bard spells require a performance prerequisite in order to cast them.  These prerequisites are natural outgrowths of the spell (e.g. play music or sing -for lullaby-  = can cast sleep).  Prerequisites include music and/or singing, story telling, acting, fortune telling, tumbler/juggler, ..... These skills must be studied skills, not defaults!

Links to Bard Spells by Levels