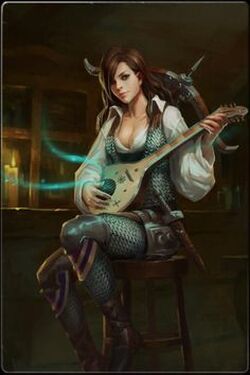 Prime Attribute: Charisma
Overview
Bards are the consummate 'people persons'.  While other character classes, such as Paladins, may depend upon their charisma for an aspect of their character; the Bard's entire character revolves around her ability to relate to people.  People trust Paladins and Knights and will follow them into battle; but they are still followers.  A Bard will inspire a person from the 'inside-out'; convincing him he is heroic and that his deeds will matter to both him, his community, and his descendants.  Also, a Bard will find out far more about a community and its inhabitants than any other character; he knows who to ask, how to ask, what to ask, and how to listen carefully. Taking all those pieces together, a Bard is able to tease out information unavailable to others and to use it.  A Bard's stories or songs can sway communities or even nations.

Of course, it is a 2-way relationship.  Bards became Bards because they love to entertain.  They not only find it easy to entertain people; but it is a necessity as well.  Bards enjoy being the center of attention.  Bards are a group that genuinely enjoy their work.  However, they expect to be paid and to enjoy the other fringe benefits that come from a certain style and a way with people.
Bards are attracted to adventuring parties.  Such a group is not only a wonderful opportunity to travel and see new places, but also a rich source of stories and renown.  While a Bard can attract more attention at times then an adventuring party may desire, the Bard's talents far outweigh any such minor inconveniences.  Bards are able to inspire their companions.  In addition, they are a wealth of knowledge and have the skills to find out additional information.  Plus, as noted earlier, Bards are the uncontested master class at negotiations, assessing and altering social situations and NPCs, and negotiating favourable deals and rates for the Party.  Finally, the Bard is a valuable addition in her own right.  Minstrels or Gleemen have all the before mentioned Bard skills plus very respectable fighting skills and a few rogue skills thrown in as well.  Troubadours or Jongleurs also have the same Bard skills as their Minstrel counterparts.  However, these Bards have magical abilities and can cast literal spells with their performances.  Such talents come at a cost of their weaker fighting skills than the Minstrels and a lack of rogue skills.


Overview of Troubadours/Jongleurs: (note: the rest of the information on this page applies to Troubadours/Jongleurs - see the Minstrel page for specific information on that Bard class).
While Troubadours are sometimes referred to as "High Bards", they are not better nor worse than minstrels, just different.  Troubadours tend to perform for the middle and upper classes (hence, "High Bards").  Their performances are usually the reason why the audience is there (food and drink or other entertainment may be present; but the performance is why the audience is in that spot at that time).   A troubadour's aim is to present the most perfect performance for their audiences.  For instance, a troubadour will strive to have the most accurate recitation of "The Lay of Camwyn Dragonmaster" with the perfect musical accompaniment; whereas, a minstrel will happily change names and notes in order to amuse/interact with his audience.  Both bards believe they are giving the best performance for their audience and deserve the most acclaim - it's their approaches that are entirely different.