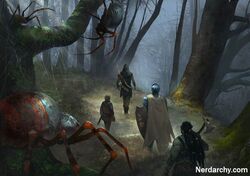 #Walking pace over clear ground at normal pace(note - not searching nor exerting).
Cursory search (checking the obvious such as behind wall hangings, if doors are locked, etc.) or if there is only a limited amount to search (e.g. overland travel and checking behind bushes, etc.). Moving fairly quietly so +1 to surprise/wisdom check - 2/3 Movement
Intense search (actively searching for hidden doors, traps, mapping, etc) 1/10 movement.  Note: a room that is cluttered that is being actively searched will take longer.  Castle Keeper bases movement (and what the characters find) based on the description of what the characters are doing (varies between 1/10 to 2/3 movement rate plus will affect possible surprise/wisdom check bonus/penalty - quiet intense search +3 versus smashing furniture apart for hidden compartments -3).
*This assumes an 8-hour walking day over gentle ground.

To supply the CK with a very simple and straightforward approach to governing movement rates through terrain and its many obstacles, including the weather, the CK should cross-reference the three tables below (after finding the base movement rate in Table: Movement Rates). Begin with Table: Movement Rates Per Terrain to determine terrain factors affecting the movement, and then move to Table: Movement Rates Per Obstacle Type for obstacle factors; finally, consult Table: Movement Rate in Weather. Together, these tables will yield the final movement rate. This movement rate is based on an individual moving overland with weight, 30-40 lbs.
Elevation and terrain do not affect flying movement at all. Weather can, however.
Elevation
The first terrain feature the CK must determine is the elevation. Traveling high in the mountains means less oxygen, as well as more strain due to the up-and-down nature of the movement. For game purposes, the time gained in downhill travel is average with the time lost going uphill. Elevation changes are generally broken down into the following categories; none, rolling, hilly, and mountainous.
Note: Here the ground is relatively flat. There are no appreciable elevation changes which affect movement. Rolling: Elevation changes are noticeable and travel rates uphill and downhill are affected. A slight weight gain is given to uphill travel or mitigating factors, such as switchback roads, affecting overall movement rates.
Hilly: Elevation changes are noticeable. Movement uphill slows appreciably, and movement downhill does not replace the lost time or distance of moving uphill. Downhill movements are greatly affected by terrain, as roads or trails switchback and follow irregular courses over any given stretch of land. Mountainous: Elevation changes in mountainous regions are extreme, and movement uphill can be arduous and demanding, slowing movement rates appreciably. Roads and trails follow very irregular courses over any given mile, switchback a lot, dipping and rising with local terrain features. Movement rates downhill do not replace the time lost in moving uphill.
The effects listed in Table: Movement Rates Per Terrain are the maximum movement rates as a percentage of normal speed. For example, a human moving in mountainous terrain can only move 25% of his normal walking pace, so .5 miles (.8 kilometers) per hour. The following chart assumes movement through a mountain range rather than climbing a summit. Climbing a summit changes the ascent rate to 5% and the descent rate to 75%.

Obstacles :
Once one moves off the road or away from well-tended trails, obstacles greatly affect overland movement. Obstacles can include anything from swampy morasses, sandy dunes, piles of deadfall, rocky outcroppings, thick brush, rubble in a city, and even deep grasses. The range of material and debris that can impede movement overland is vast and dealt with in the most cursory of manners. The CK must decide how difficult it is to move through certain terrain types based on the guidelines.
Overland movement can be slow. It can be very slow. Even short stretches of land can present nearly impenetrable conditions, and to get through them, hacking and clearing is sometimes necessary. In an old-growth forest with long-living trees, deadfall and debris can staggeringly impede movement. On the other hand, if the rate of decomposition is speedy, the same forest’s ground cover clears fairly quickly, making movement much easier. Deserts with deep sandy dunes present very difficult traveling conditions, while regions with rocky escarpments and a few dunes are almost like traveling on along a road.
The Castle Keeper must examine and determine the nature of the environment the characters are traveling through to gauge the difficulty of travel. Determine the type of obstacle below, the effect they have on movement rates is detailed in  Movement Rate Per Obstacle Type.
It is important to note that the obstacles have to be significant and consistent to grossly affect movement. All forests, deserts, and even grasslands have their densely-packed areas, but often these can be bypassed or, even though costly in time, moved through. Traveling overland through the Ozarks would be considered travelling through a hilly region (regardless of ascent or descent, so slight are the elevation changes) and have low density obstacles, despite all the creeks, rivers, deadfall and underbrush present.
On Movement Rate Per Obstacle Type, the effects of movement are assessed for each terrain obstacle type’s density. Assess the effects of obstacles after the effects for Terrain.
None: This region contains no appreciable obstacles. The ground cover is slight, and the earth is hard packed, lacks rocky outcrops or other impediments to movement.
Slight Density: This region has moderate movement impediments. The undergrowth is sparse, with small creeks, rocky outcrops, deadfall, and other debris occasionally impeding movement and causing travelers to frequently move around it. These areas might include small bodies of water, boggy areas, deadfall, exposed sandy soils, boulder-strewn ground, vines, and similar natural growth or debris. Overgrown Density: These areas challenge any creature travelling through them. Dense underbrush, vines, thorn thickets, creeks, large bodies of water, deep boggy soils, deadfall, and other similarly difficult terrain make movement extremely difficult. Often backtracking is necessary to move through an area. Some regions require a wide berth, and sometimes deep, exposed sandy soils slow movement. Snowdrifts, ice, and exposed rock formations also can combine to make travel difficult though these regions.
Thick Density: Movement through areas with a high obstacle rating can be exceedingly difficult. These obstacles include swampy terrain with at least 6 inches of muck and dense undergrowth, sand-dune deserts, areas of deep snow drifts, or areas of densely packed, large deadfall, such as in many oldgrowth or boreal forests or dense jungle growth like that in the Amazon’s interior.
Ice, etc. cause difficulty of movement by either poor footing or impeding leg movement (such as waist-deep snow).

Weather
Weather can greatly affect movement. Because it varies greatly in effect, timing, and nature, weather is discussed separately. Weather can be so severe as to bring virtually all movement to a halt. Some weather conditions are deadly (white-outs, blizzards, tornadoes and flooding, for example), while others are actually invigorating (cool drizzles on hot summer’s day, for instance). When considering the weather’s effects on movement, try to place yourself in that condition and see how you might react to it. Also, bear in mind, people once spent a great deal more time outside experiencing the weather; they were not relaxing in cooled/heated, dry houses. People were once more accustomed to managing in adverse weather conditions, and, considering the nature of the milieu, the players’ characters would also likely be more acclimated to what we might consider adverse weather conditions.
Rainstorms, snowstorms, whiteouts, tornadoes, monsoons, driving rains, snow flurries, heat waves, cloudy conditions, wind, and sandstorms can all hinder, slow, or even stop characters from moving forward should the right condition exists. The weather can be an enemy as deadly as any fantastic creature one can imagine. However, it probably shouldn’t be used as such. Weather is most often a backdrop to the story, and it should only rarely be made dangerous. It should, however, be an impediment and obstacle as with anything else in nature. After accounting for the effects of terrain and obstacles, consult Table Movement Rate in Weather.
None: No weather of appreciable note.
Moderate: This weather type includes snow flurries, sprinkles, showers, low winds, and warm or cold temperatures
Bad: These are rainstorms, snowfall, average winds, or temperatures ranging from just below freezing to high.
Severe: Severe weather conditions are driving rainstorms, whiteouts, snowstorms, windstorms, sandstorms, and the like.

Example:
​    A human is moving overland through a hilly region and is off the beaten path. He is on the uphill side of the range, so more than 75% of his movement is uphill. The region is an old-growth, temperate, hardwood forest in late winter, when the undergrowth is minimal. His major movement impediments are the terrain’s rocky outcrops and the many streams, creeks, and deadfall present. This is a low-density obstacle region. The human’s normal movement rate is 2 miles per hour. This is automatically reduced to 40% because he is moving primarily in the uphill direction, as per Table Movement Rates per Terrain. So his movement is .8 miles per hour. Modify this further by his moving through a low density obstacle area, as per Table Movement Rate per Obstacle Type; then multiply .8 by .75 to arrive at .6 miles per hour. The weather is the final factor to consider. In this case, there are slight snow flurries, making the weather a moderate rating. Consulting Table Movement Rate in Weather, the CK must multiply .6 by .90 to come with his final movement rate of .54 miles per hour. Rounding down, our noble adventurer is moving at one-half a mile per hour. Given 8 hours of travel, he can move 4 miles.


Getting Lost Outdoors
For those not familiar with the woods, getting lost is not that difficult. Even in broad, open plains, a slow and gradual declination change in direction of movement can cause one to end up many miles from one’s destination. In woods and hilly regions, this effect can be dramatic, as keeping one’s direction becomes increasingly difficult. Even a ranger can veer off course, though skilled woodsmen usually note when they are veering off course and correct it fairly quickly. Weather conditions also greatly affect one’s ability to stay on a targeted direction of movement. Familiarity with one’s landscape mitigates this to a great degree, as one recognizes landmarks, landforms, and other familiar terrain. Keeping track of direction requires a making a wisdom check from time to time. The player characters must appoint a party member as the designated guide; if they fail to do so, the CK should appoint one secretly behind the screen. At the beginning of each travel day, the party’s guide makes a wisdom check. The challenge base is always 12. Characters DO NOT add their level to the die roll, but they do add their attribute bonus. Success indicates the person has chosen the correct path. Failure indicates he has veered them off course. To determine direction, consult Table Getting Lost. Consult the rating of each feature below to determine the wisdom check’s final challenge level.