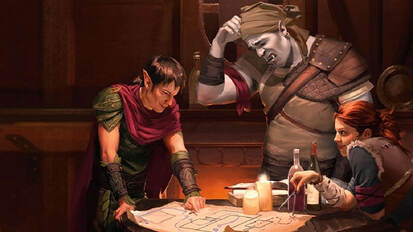 NPC/Monster Determination:
In the first step, the DM secretly decides in general terms what each opponent will do— attack, flee, or cast a spell. He does not announce his decisions to the players. If a spell is to be cast, the DM picks the spell before the players announce their characters’ actions.
Player Determination:
Next, the players give a general indication of what their characters are planning to do. This does not have to be perfectly precise and can be changed somewhat, if the DM decides circumstances warrant.
If the characters are battling goblins, a player can say, “My fighter will attack” without having to announce which goblin he will strike. If the characters are battling a mixed group of goblins and ogres, the player has to state whether his character is attacking goblins or ogres.
Spells to be cast must also be announced at this time and cannot be changed once the initiative die is rolled.
Before moving on, the DM will make sure he has a clear idea of not only what the player characters are doing, but also what actions any hirelings and henchmen are taking. Once he has a clear view of everything that’s likely to happen, the DM can overrule any announced action that violates the rules (or in the case of an NPC, is out of character).
He is not required to overrule an impossible action, but he can let a character attempt it anyway, knowing full well the character cannot succeed. It is not the DM’s position to advise players on the best strategies, most intelligent actions, or optimum maneuvers for their characters.
Initiative:
In the third step, dice are rolled to determine initiative, according to the rules for initiative (see “Initiative” below).
Resolution:
In the last step, PCs, NPCs, and monsters make their attacks, spells occur, and any other actions are resolved according to the order of initiative.
The above sequence is not immutable. Indeed, some monsters violate the standard sequence, and some situations demand the application of common sense. In these cases the DM’s word is final.
Example:
Rath is leading a party through the corridors of a dungeon. Right behind him are Rupert and Delsenora. Rounding a bend, they see a group of orcs and trolls about 20 feet away. No one is surprised by the encounter.
The DM has notes telling him the orcs are hesitant. He secretly decides that they will fall back and let the trolls fight. The trolls, able to regenerate, are naturally overconfident and step forward to the front rank (cursing the orcs at the same time) and prepare to attack. Turning to the players, the DM asks, “What are you going to do?”
Harry (playing Rath, a dwarf who hates orcs): “Orcs?— CHARGE!”
Anne (playing Delsenora the wizard): “Uh—what!? Wait— don’t do that . . . I was going to . . . now I can’t use a fireball.”
DM: “Rath is charging forward. Quick—what are you doing?”
Jon (playing Rupert, the half-elf, to Anne): “Cast a spell! (To DM) Can I fire my bow over him?”
DM: “Sure, he’s short.” Jon: “OK, I’ll shoot at orcs.”
DM: “Anne, tell me what Delsenora’s doing or she’ll lose the round trying to make up her mind!”
Anne: “Got it!—Acid arrow spell at the lead troll.”
DM: “Fine. Harry, Rath is in front. Roll for initiative.”