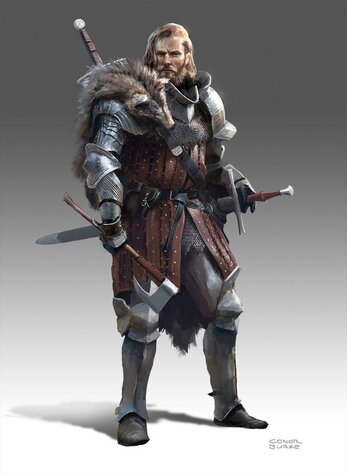 Prime Attribute: Strength
From the maelstrom of war and conflict great warriors arise, tested on and mastering the brutal fields of battle. These combatants nobly make war against cruel overlords and barbarous hordes, or are driven to conquest and brutish slaughter by depraved spirits and malignant desires. Found in all societies and amongst all peoples for whom battle is a constant, these are those who turn to the sword and might of arm to defeat their foes and fulfil their desires. Kings and tyrants, warriors and brigands, foot soldiers and raiders, adventurers and treasure hunters; these are all fighters.
The fighter is the archetypical warrior, superior to all other classes in armed combat. Fighters come from every geographic region and occupy all social strata. They are born with a strength of will and spirit that leads them to seek the field of battle. They find the clash of metal and the ring of steel invigorating at times, and necessary at others. Fighters do not live in fear of the melee; they face their foes with gritted teeth and steely determination, longingly anticipating the next test of their strength and skill. All fighters, regardless of background, are characterized by the will and ability to use their brute strength and swift sword to solve problems or overcome foes. Fighters are a unique breed and make their own way in the world, for ill or good.
Fighters depend on heavy armor and weaponry that require great strength and skill to wield properly. Whether sallying forth with a massive double bladed battle axe, or a delicately balanced saber of the finest steel, whether sheathed in plates of shiny metal, or hefting only a shield on the blood washed fields of combat, the mighty arms of these warriors rise and the weak fall beneath them. And it is that strength that carries fighters through the laborious contests of steel that mark their daily lives.
Many cultures have unique weapons, and warriors in those cultures are often trained in their use, wielding them as if extensions of their bodies. However, all weapons, regardless of make, function to the same end and the well-trained and highly skilled fighter intuitively knows the best manner in which to use them. Fearsome with any weapon, the fighter is an opponent that only the foolish underestimate and the weak regret offending.
As with weapons, the use of heavy armor is demanding upon the body. When worn by those unfamiliar with its weight and bulk, armor can be a hindrance to movement. It requires great strength and knowledge to properly wear any armor and maintain one’s skill of hand while so donned. Fighters are accustomed to the bulk and weight of armor, knowing how to manage and adjust their thrusts and parries when wearing it. Once trained, a fighter knows how to adjust his or her fighting style to the weight and load of any armor in order to use it effectively.
ABILITIES
WEAPON SPECIALIZATION:
At 1st level, the fighter can choose one weapon with which to specialize. All weapons are eligible, including ranged weapons such as the bow or sling. The weapon with which the fighter specializes is usually common to the fighter’s culture or society, but it need not be. The Castle Keeper and player should consult to determine which weapons are available for specialization, bearing in mind culture, location and availability. The fighter can only choose one weapon with which to specialize. Once chosen, the weapon cannot be changed. For fighters between 1st and 6th level, this specialization imparts a +1 bonus to hit and a +1 bonus to damage when being used. At 7th level and above, the bonuses increase to a +2 to hit and +2 to damage.
COMBAT DOMINANCE:
At 4th level, the fighter gains an extra attack with any weapon when fighting opponents with 1 hit die or less. In order to use this ability, the fighter must direct all attacks in a combat round against opponents that meet these criteria. The fighter can split the available attacks among qualified opponents as desired. This ability improves as the fighter progresses in levels. The fighter gains an additional attack for every four levels gained after 4th level. So, at 8th level, the fighter is allowed a total of three attacks, and at 12th level, the fighter gains four attacks against these opponents. This ability does not combine with the Extra Attack ability described below. This ability is only useable with melee weapons and cannot be applied to ranged combat.
For example, an 8th level fighter is battling 5 kobolds in a dank cavern. The kobolds have 1HD. When it comes time to attack, the fighter is allowed three swings against the kobolds; one swing for the class and two swings for the Combat Dominance ability. The fighter can choose to attack one kobold three times or three different kobolds one time each.
EXTRA ATTACK:
At 10th level, the fighter gains one additional attack each combat round with any weapon. This ability does not combine with Combat Dominance. When in a combat where both abilities could be used, the player must choose to use either the Extra Attack or Combat Dominance ability during each round. The Extra Attack ability is useable with melee and ranged weapons.
PRIME ATTRIBUTE: Strength
ALIGNMENT: Any
HIT DICE: d10
WEAPONS: Any
ARMOR: Any
ABILITIES: Weapon specialization, combat dominance, extra attack