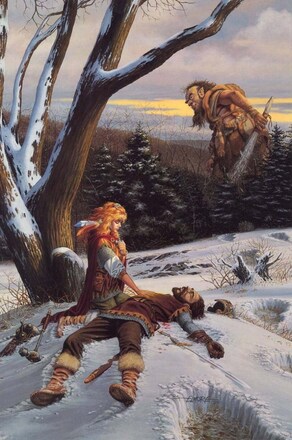 ​
HIT POINTS - detailed
Hit points represent the amount of damage, physical and mental, a character, non-player character or monster can take before passing out or dying. A character’s hit points are a mere abstraction and are not a numeration of the character’s physical being. It is generally a representation of the overall health of the individual. The higher the hit points, the healthier the individual.
Hit points are determined by a character or monster’s hit die. There are several hit die types: d4, d6, d8, d10, and d12. Class descriptions list the hit die type for that class. Monsters have various hit die types also. These are listed with the monster descriptions as given in the Monsters & Treasure book.
Hit points for the classes are acquired by level. At each level, the hit die type is rolled and added to the previous level’s total. The constitution modifier is added or subtracted from this roll. At 10th level and above, all classes acquire hit points at a specified rate. Constitution modifiers are added to or subtracted from this. In all cases, a character gains at least 1 hit point for each level advanced.
Monster hit points are specified in the monster description. Monsters receive a number of hit die types for hit points. Some rolls are adjusted. For example, 3d6 indicates that three 6-sided dice are rolled and added together for that monster’s hit point total. 3d12+4 indicates that three 12 sided dice are rolled and 4 added to the total.
In some instances, such as with a bard’s inspire ability, characters or monsters can gain temporary hit points. Temporary hit points are added to a character’s current hit points. In combat, temporary hit points are the first to be reduced due to combat, spells or other instances in which damage occurs. When all temporary hit points are gone, they are removed from the character’s normal hit points. For all intents and purposes, temporary hit points act as real hit points as long as the spell or ability is in effect. The only exception is that temporary hit points cannot be healed or cured.
Hit points can be reduced by weapons, magical spells, exhaustion, and poisons, amongst other things. These are detailed in the following section. Once damage is taken, it must be healed for the hit points to be restored to their maximum level. Hit points can never be healed beyond what they were before taking damage.
In general, hit points heal at a rate of one point per day and only if the character is resting, well fed, kept warm and the wounds being tended to. After seven days, the rate of healing increases to include the constitution bonus, if any. After 14 days, the rate of healing doubles and after thirty days, it triples. Rates of healing can be adjusted by magical healing, herbs, diet, level of care or other factors the Castle Keeper deems applicable.
In general, when 0 hit points is reached, the character or monster passes out. They are not dead, but rather incapable of acting while passed out due to blood loss and physical or mental damage. The character or monster is unable to act and is unconscious or gravely wounded. Those so wounded, if still conscious, can do little more than crawl from the battlefield or call out for help. Those with 0 hit points recover consciousness in 1d6 hours, after which they can move at ½ their normal move rate, but still cannot participate in combat, cast spells, turn undead or any strenuous or demanding action. The full effect of magical healing of characters reduced to 0 hit points is immediate.
At -1 to -6 hit points, the character or monster is unconscious and grievously wounded. They require bed rest to recover. Unless magically healed a character so wounded must rest 24 hours before the process of healing begins. With most magical healing, the character’s hit points can only be returned to 0, after which healing proceeds normally.
For example, a knight is struck by a club from an ettin and reduced to -1 hit points. Before healing begins, the knight must wait 24 hours. However, a cleric of goodly intent decides to share the grace of their deity with the knight and cast a cure light wounds on the knight. The cure is for 8 hit points, but the knight is only brought back up to 0 hit points. However, healing can proceed as normal thereafter.
At -7 to -9 hit points, the character or monster is mortally wounded and loses one hit point per round after reaching -7 hit points. Aid administered to the wounds stops the hit point loss. This takes at least one full round, during which no hit point is lost. After 24 hours have passed, the normal healing process as described for -1 to -6 hit points begins.
At -10 hit points death occurs immediately. Only resurrection, reincarnation or bribes to the Castle Keeper can remedy death.