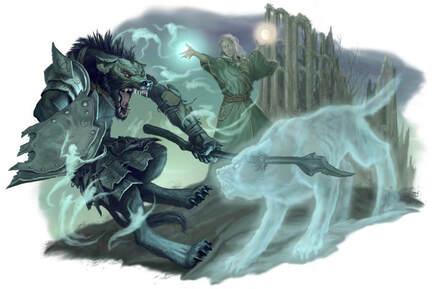 Prime Attribute: Intelligence
In a profession where skill is measured by power, there are those magi who use their powers to make a mockery of reality itself. Rare indeed are the illusionists. These are spellcasters who use the arcane to blend and blur and twist what is, with what may be. They ply the minds of others and twist desire and perception into deceptive and often deadly illusions. Faced with the illusionists’s spells and incantations, few can unravel the truth from their own fears or desires. Greatly feared for their mind influencing spells, the illusionist is heralded as one of the greatest and most mysterious of the magi.
An illusionist uses magic to alter the perceptions of others and even reality itself. This magic deceives the senses, creates false images and sounds, changes sensory qualities, affects the mind’s perceptions, and in some cases fashions arcane energies into something real. The illusionist is an uncommon and, more often than not, underestimated type of spell caster. They are greatly valued for their understanding of the mental caprices of most intelligent races. Illusionists are often found in high places of government using their skills to enchant those of both high and low birth, twisting the desires of any that may be of use.
Powerful illusionists make loyal soldiers out of brigands, and fools out of professional military men and can, with their magic, empower rabble to sweep trained armies from the field.
A keen intelligence and a depth of perception unknown to most men are required for the illusionist to master the complex relationships between magic, the mind and the mundane. Further, an empathy for those around the illusionist is indispensable for the illusionist to create masterful illusions and to warp another’s perception of reality.
An illusionist may choose any alignment. They are not bound to follow any particular creed, culture or religion. They come from all walks of life and, due to their meddling in the minds of others, they frequently have a greater empathy for all castes of people than any of the other classes.
llusionists are generally untrained in martial warfare, and are thus limited in their choice of weapons. In any case, most illusionists view the use of weapons as vulgar. It takes little intelligence, so they have convinced themselves, to wield a weapon in combat, so eschew them.
Almost all spells require somatic and verbal actions and these complex gestures and intonations cannot be performed unless the illusionist is free to move and speak. Indeed, any use of armor or shield prevents the illusionist from casting spells.
ABILITIES
SPELLS:
An illusionist casts arcane spells like a wizard; however, illusion magic is inherently different and requires a unique spell list. Like a wizard though, an illusionist is limited to a certain number of spells of each spell level per day. The Illusionist Spells Per Day Table shows the number of spells per day an illusionist may cast. An illusionist must prepare spells before casting them. This is done by studying spells from a spell book. While studying, the illusionist decides which spells to prepare. Spell memorization and descriptions are covered in detail in the Magic section.
ILLUSIONIST SPELL BOOKS
The number of spells that a an illusionist has in their spell book at the beginning of play is equal to the number of spells they can cast at first level. For example, a 1st level illusionist with 14 Intelligence can cast four 0 level spells and three 1st level spells (2 + 1 bonus). So, the character would begin play with a spellbook containing four 0 level and three 1st level spells. The spells in the spell book can either be chosen by the Castle Keeper, the player, agreement between the two or randomly (use the Spell List Charts starting on page 83 for illusionists).
BONUS SPELLS:
With a high intelligence score, an illusionist gains bonus spells. If the character has an intelligence of between 13-15, they can memorize an extra 1st level spell. If the intelligence score is 16 or 17, they can memorize an extra 2nd level spell and if 18 or 19, they can memorize an extra 3rd level spell. The bonus spells can only be acquired if the illusionist is at a high enough level to cast that spell level. Bonus spells are cumulative.
For example, a 4th level illusionist with an 18 intelligence receives four 0 level spells, four 1st level spells, and three 2nd level spells. No bonus 3rd level spell is acquired until the illusionist reaches 5th level.
SHARP SENSES:
An illusionist’s innate ability to distinguish the real from the unreal imparts a +1 bonus to all illusion saving throws. The bonus increases to +2 at 4th level, +3 at 7th level, +4 at 10th level, +5 at 13th level and +6 at 16th level.
DISGUISE (CHARISMA):
Using magic and props, the illusionist can disguise himself and impersonate others. The effort requires 1d3x10 minutes of work. A disguise can include an apparent change of height or weight of no more than one-tenth the original. The Castle Keeper makes the character’s check secretly, so that the player is not sure if the disguise is successful. Illusionists can use spells, like change self, to augment their disguise and give them a greater chance of success. The following modifiers are applied to a disguise check when appropriate: sex difference -2; race difference -2; age difference -2 per 10 years.
Success indicates a disguise good enough to fool normal observers. The Castle Keeper may allow a suspicious observer an intelligence check to see through the disguise. If the observer is familiar with the person being impersonated, they gain a bonus of +4 to the intelligence check. If the person being impersonated is a close associate or friend of the observer, the check is made at +8. Additionally, disguises must be occasionally changed to remove suspicion.
PRIME ATTRIBUTE: Intelligence
ALIGNMENT: Any
HIT DICE: d4
WEAPONS: Club, dagger, dart, staff
ARMOR: None
ABILITIES: Disguise, spell casting, sharp senses