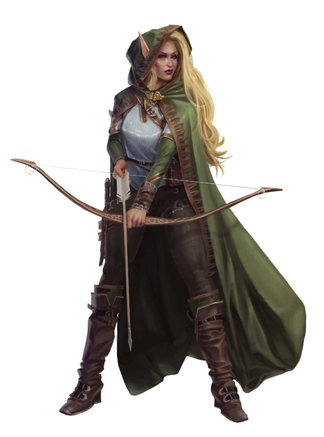 Details: RANGED COMBAT
Ranged combat is much like melee combat except it occurs when an attack is made with a missile weapon against a defender some distance away. Dexterity is the attribute that modifies a ranged attack to hit roll. If the total of the d20 roll plus the character’s basic to hit bonus and dexterity modifier is greater than or equal to the defender’s armor class, the attacker has successfully hit the defender and inflicts damage as determined by the missile weapon used.
There are two types of ranged weapons: thrown and propelled. Thrown weapons are those whose momentum are dependent upon the strength of the character or monster throwing it. These include javelins, daggers, spears and the like. Propelled weapons are those whose momentum and thrust are dependent on the mechanism which propels them forward. This includes crossbows, stones from a sling and similar devices. While a character’s dexterity modifier is added to all ranged to hit rolls, a character’s strength modifier is only added to the damage of thrown weapons, not propelled weapons.
Ranged weapons also have range increments, and they have a maximum effective distance equal to three times the listed range increment as detailed in the equipment list. The listed range increment is considered to be close range. Twice the range increment is medium range and three times the increment is long range. Medium range results in a -2 penalty to the ranged attack roll, and long range results in a -6 penalty to the attack roll.
Ranged weapons that miss their target continue on their path and can potentially hit another target within close range. If the target of the attack is missed, the projectile continues in a straight line and can hit anything in its path. For each ten feet traveled within close range, the archer should roll a to hit roll again, but the attacker accrues a -1 penalty for every 10 feet beyond the original target.
With a critical hit (roll of a 'natural 20'), the attacker does double (2X) the damage.    The result is calculated as per a normal successful hit (with all bonuses) and then doubled.
With a roll of a 'natural 1', the attacker loses the next round of action and any remaining attacks or actions, if any,  in the round the '1' was rolled in. Thus movement and attack are affected. So if a longbow archer rolls a natural 1 on his first arrow, he loses the chance for a 2nd arrow that round or his movement action that was to follow firing that arrow.  However, a critical fail on the 2nd arrow that round does not affect the first arrow's results nor would the archer lose his movement that round if he moved first and then had a critical fail on his 1 shot.  In either case, the attacker loses all actions for the following round.  The DM will describe the exact occurrence that fits the critical fail (e.g. tips the quiver so the arrows scatter and need to be gathered up in the next round or the attacker needs to reattach the stirrup of the light crossbow before it can be reloaded...).  No additional penalties will be applied for that round (e.g. the attacker will not suffer an AC penalty because he is picking up the arrows, etc.).
With Attacks of Opportunity, an attacker using a ranged weapon exposes himself to an Attack of Opportunity if he attempts to attack while within melee range of an enemy.  The enemy gets a free attack while the attacker with the ranged weapon is denied his dexterity bonus to AC and any active defenses (he is standing still for a moment while he aims).  The best solution is for the attacker with the ranged weapon to take a 5' step out of melee range.  If a 5' step is not enough, the attacker with the range weapon may use 1 of 2 options:  1. If the 5' step gets him out of melee range, he may move up to 1/2 his movement rate and make an attack if his rate of fire is more than 1/round. Option 2: the attacker may make a fighting withdrawal if he remains in harm's way for more than a 5' step (no attacks are possible) but there are no penalties to AC.  Finally, the attacker with a ranged weapon may choose (or have no other choice) to risk the Attack of Opportunity and then launch his own attack.  Note: Each enemy in melee range gets an Attack of Opportunity.  Also, if the attacker with the ranged weapon stays in melee range, he exposes himself to additional Attacks of Opportunity every round plus any regular melee attacks….
Cover:  The following chart gives AC adjustments for concealment/soft cover and hard cover.  Soft cover makes the target harder to see but does not stop arrows whereas hard cover offers both concealment and stops projectiles.   Note: these adjustments apply to a target behind cover but can also apply to a target's AC in a clear area with the attacker in cover (e.g. an attacker concealed behind light brush - 1/2 cover can have his/her projectile deflected). Also, if an attacker in full cover cannot see the target….. The following chart addresses cover where the attacker knows the defender is there (e.g. a defender at +4AC because his lower body is hidden by a stone wall or a wizard cowering behind a large tree at +10AC - you know he's there but cannot see him.  See situational modifiers for 'larger cover'.
COVER    AC ADJUSTMENT - SOFT    AC ADJUSTMENT - HARD


*These concealment penalties to hit apply to the overall situation - i.e. the attacker does not know the location of the enemy.  So, an enemy in dense fog (-4 to hit) is in a general location (glimpses in the fog); but would effectively become -2 to hit (+2AC in soft cover) if the attacker knows the defender's location (e.g. at the corner of the building, easier to hit but still not as easy as 'normal' conditions).


Grenadelike Missiles
Unlike standard missiles, which target a specific creature, a grenadelike missile is aimed at a point, whether this point is a creature or a spot on the ground. When the attack is announced, the player indicates where he wants the missile to land. This then becomes the target point and is used to determine the direction and distance of any scatter.
Most grenadelike missiles are items of opportunity or necessity—rocks, flasks of oil, vials of holy water, or beakers of acid. As such, these items are not listed on the equipment tables for range, ROF, and damage. The range each can be thrown varies with the Strength of the character and the weight of the object.
A missile of five pounds or less can be thrown about 30 feet. Short range is 10 feet, medium range is 20 feet, and everything beyond is maximum range. Heavier items have reduced ranges. Just how far an object can be thrown is decided by the DM.
Exceptionally heavy items can be thrown only if the character rolls a successful bend bars/lift gates check. In no case can a character throw an item heavier than his Strength would allow him to lift. Thus, the DM can rule that a character would have little trouble chucking a half-empty backpack across a ten-foot chasm, but the character would need to make a check in order to heave an orc ten feet through the air into the faces of his orcish friends.
Once a container hits, it normally breaks immediately.  However, this is not always true. Some missiles, like soft leather flasks or hard pottery, are particularly resistant. If there’s some doubt about whether or not a thrown object will break, the DM can require an item saving throw (this information is in the DMG) to see if it shatters or rips, spewing its contents everywhere.
The DMG contains information on how to resolve the inevitable situations in which grenade-like missiles miss their targets.
Types of Grenade-like Missiles
Acid damage is particularly grim. Aside from the possibility of scarring (which is left to the DM), acid damage cannot be healed by regeneration. It must be healed normally. Thus, it is very useful against regenerating creatures such as trolls. Acid is very rare.
Holy Water affects most forms of undead and creatures from the Lower Planes. It has no effect against a creature in gaseous form or undead without material form.
Unholy water (essentially holy water used by evil priests) affects paladins, creatures whose purpose is to defend good (lammasu, shedu, etc.), and creatures and beings from the Upper Planes.
Holy (or unholy) water affects creatures as does acid, causing damage that cannot be regenerated but must be healed normally.
Oil causes damage only when it is lit. This normally requires a two-step process—first soaking the target in flammable oil and then setting it afire. Thus, using flaming oil often requires two successful attacks. A direct hit from flaming oil burns for two rounds, causing 2d6 points of damage in the first round and 1d6 points in the second round.
Poison is generally not very effective as a missile weapon. Most poisons take effect only if the missile scores a direct hit, and even then only if it drops into the gaping maw of some huge creature. Contact poisons have normal poison effects on a direct hit. The DM has information about specific poison effects in the DMG.