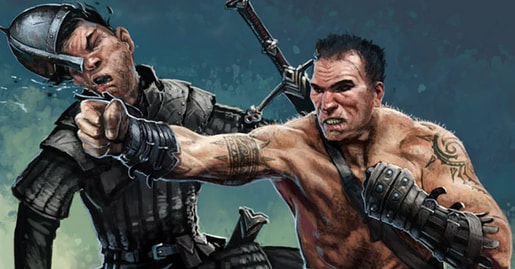 
UNARMED COMBAT (detailed)
Unarmed combat is similar to armed combat, only the attacker is not using a melee weapon, but natural weapons, such as claws, hands, fangs or even the whole body. Many monsters employ unarmed melee attacks, as do monk characters. In most cases, the success of these attacks are determined as with a normal melee attack. The attacker rolls a d20 and adds the basic to hit bonus plus any strength modifier. A monster’s basic to hit bonus is equal to its total number of hit dice (a 3d8 hit dice creature adds a +3). If the total is greater than or equal to the defender’s armor class, the attacker has successfully hit the defender and inflicts damage as determined by the class ability or monster description.
There are also special unarmed attacks of an entirely different nature and effect: grappling, pummeling, overbearing and touch attacks. Each type follows the same basic principle but with different modifications to the to hit roll and damage inflicted.
GRAPPLING
Grappling involves grabbing and holding a defender, as with classical wrestling or a snake constricting its body around its prey. Grappling is directed at holding an opponent and subduing them. The attacker rolls a d20 and adds any strength modifier and his Bonus to hit (BtH).
The armor class of a defender in a grappling attack is different than normal. A defender without strength as a prime has a standard AC of 12. A defender with strength as a prime has a standard AC of 18. Armor has little effect on the capacity to defend against this type of attack and is not included. The AC is modified by the strength, the dexterity, and the size difference between the two opponents. If an attacker is larger than the defender apply a +2 to AC for every size category larger than the defender’s size, and a -2 for every size category smaller.
Should an attack be successful, the defender is held and cannot act except to attempt to break the hold. The defender is considered prone and defenseless. The defender can break the hold by making his own successful grappling attack.
PUMMELING
Much like boxers or martial artists, pummeling involves the use of fists, feet, knees, elbows or other body parts to inflict damage on an opponent with the intention of knocking them out or otherwise incapacitating them. The attacker rolls a d20 to hit, adding any strength modifier plus, his BtH, and any other modifier the Castle Keeper deems appropriate. If the total equals or exceeds the defender’s armor class, the pummeling inflicts 1-2 hit points of subdual damage. Damage is modified by strength.
OVERBEARING
This type of attack is used to knock an opponent down. This is a tactic used in wrestling and other types of hand-to-hand combat, as well as when an animal charges and knocks someone over. The attacker rolls a d20 to hit and adds any strength modifier or other modifier that the Castle Keeper deems fit. The Castle Keeper may or may not deem the basic to hit bonus an appropriate modifier.
The armor class for overbearing attacks is determined in the same fashion as for grappling attacks, using the defender’s strength, BtH or hit dice, and size difference as modifiers. However, unlike grappling attacks, there is one additional modifier. The defender’s BtH also modifies the armor class in an overbearing attack.


Example: a large troll attacks a small 5th level rogue halfling and tries to knock him off a bridge and into a raging river. The halfling has strength as a prime and therefore a base armor class of 18, modified by a 14 strength (+1), and his BtH (+2) adds a total of +3 for a total of AC 21. But the troll is two sizes larger, so a -4 adjustment to the halfling’s armor class results in an AC of 17.


If a hit is successful, the defender is knocked prone for the remainder of that round. An attacker cannot knock over a defender two sizes larger. In addition, the defender takes 1-2 points of subdual damage.
An attacker attempting to overbear suffers a -2 penalty to armor class because they are more exposed than usual. The penalty remains to their armor class for the combat round.
TOUCH ATTACK
A touch attack is one in which an attacker is simply trying to touch an opponent. This often occurs with spells that require a touch to be successful. With a touch attack, a standard armor class of 10 is used for all defenders, adjusted only by dexterity of the defender and special modifiers resulting from, for example, magic items or spells. Monsters use the base 10 AC with no modifiers.