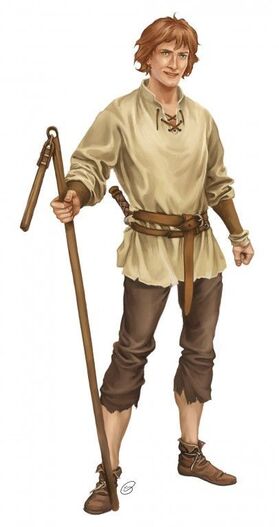 
Example from Prealith campaign world.  This one goes well beyond what you should do….  The words in black would be the actual backstory; the words in green just help me explain the backstory write up.


Name: Rolf Dougal
Class: Barbarian
Organization: Belongs to Ridgeway Highlanders.
Key points from the group description (I've included it so you can see what a player would read before deciding on the short list of how Rolf would interact with the world based on his society.  That list comes from this information) :
Highlanders live in clans.  Clans engage in ritual raiding where goal is to embarrass other clan by taking goods and making other clan look foolish.  Injuring or killing is extremely discouraged.  Clans, while rivals, view world as 'us versus them'.  Monsters are to ruthlessly wiped out - clans will work together under a charismatic leader.  "Lowlanders" (humans, demi-humans who are not in the clans) are to be pitied.  They are targets for raids - no problem taking stuff from them.  Try to avoid combat with them - not because of mercy but because they are so unaware and weak that being caught by them and needing to fight would be embarrassing.  Prefer to trick lowlanders into fighting monsters who are real enemy.   Worst insult is to tell Highlander he or she "gave up" - persistent and stubborn people.   Epitome of a Highlander is a "wise head, brave heart, and a strong arm".  Prestige is everything to a Highlander and earned by demonstrating those 3 qualities.  Take being a guest and hosting extremely seriously and ritually.  Regard healers, bards, blacksmiths, guests, children, witches/wise women, and priests as untouchable in raids and to be protected.   Live in small villages in highland valleys.  Cleric and bard magic is fine but arcane magic users under considerable suspicion and not in clans.  Witches exist but feared and shunned. Religion is somewhat scrambled version of High Lord and Gird, etc. Tactics are small unit with very chaotic larger actions. Prefer ambush tactics but also consummate brawlers and 'in your face' intimidation.  Both genders fight.  "Wolf Maidens" are respected for their speed and ferocity.  All Highlanders can fight but a smaller group of habitual fighters.  Highlanders build well with stone.  They are educated to at least the level of your typical human and usually more.  However, Highlanders have developed a fairly thick accent and their own slang - which sometimes make them seem uneducated.  Highlanders are barbarians because of their disdain for 'civilization' (cities, non-Highland life) and their incredible toughness that has developed from their environment.   Their incessant clan warfare with their 'Highland code' completes their barbaric image in lowland minds.


Secondary Skill:  Mason or farmer would fit in nicely and easily…  so
MASON (WIS) – mining, stone-cutting, stone workmanship.  Should be good at putting together and taking apart stone structures.  Good with a hammer and knows different kinds of stone.


Key Points:  (Here you take the above information and select key points that influence how you play your character and part of the world). Pick the stuff that links to the world and gives you a character you will have fun playing.


Notice that there are 8 points here (the maximum) and several of these points could have been split up to make even more points.  One third to one half of the above material would have been enough; but I got carried away.... and wanted to show you several different angles you can pursue.  With another character, we might have used his secondary skill for more points or where he came from or... Rolf's clan background just gave so many playable ideas...


Unique to Rolf:
Finally, add in 3-5 individual things about your character.  The first should be a physical description.
Notice these things are unique to Rolf.  They add to both the fun of playing Rolf but also how other players and the world relates to Rolf.  For instance, hearing "Dougal" being yelled by their scout, Rolf, warns the Party he's in combat; however, that same battlecry will be heard by everything within a wide area..... Or, the other players can have fun with these points, "So does my character observe Rolf nearly rubbing his jaw off with all of his thinking!"

Remember - The point of the backstory is to tie your character into the world he or she is from and to create someone you will have fun playing.  Enjoy!