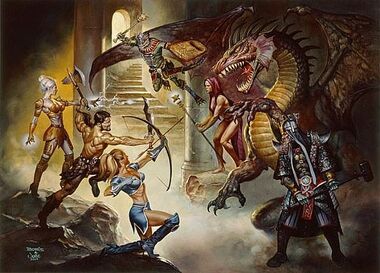 Summary:
The five types of combat actions, which all have a chance of failure, are: attack, cast a spell, move, use an ability or use an item.  Additionally, non-lethal actions (such as talking) can take place (usually with no chance of failure).  For more details on movement and what actions can or cannot be combined with combat - follow this link.

Attack  (link to additional details on melee combat)
(link to additional details on ranged combat)
(link to unarmed combat)
(link to improvised weapons)
A character or monster is allowed one attack each round unless they possess a special ability allowing them to exceed the limitation. Attacks include melee attacks, either armed with a weapon or unarmed, and ranged attacks with a missile weapon. An attack allows a character or monster to move up to one-half their movement rate. Moving farther than one-half movement rate negates the ability to make an attack.
Cast A Spell
A character or creature is allowed to cast one spell each round. Some spells require two or more rounds to cast, in which case the character must wait until the following round for the effect of the spell to take place. The magic section fully details how spells are cast and when they take effect. A character may not move any distance and cast a spell in the same round unless the spell description states otherwise.
Move  (link to additional details on Movement Actions).
If no other action is taken, a character or monster can walk a distance equal to their full movement rate. Full movement also includes jogging (twice the normal move rate) and running (quadruple the normal move rate).
Use An Ability
A character or monster may perform one class or racial ability each round. Some abilities, like spells, take more than one round to complete. Some monsters can perform more than one ability per round. Ability may involve movement, but in most cases the movement will not exceed the normal movement rate. Otherwise, the Castle Keeper retains discretion as to whether any ability use involves movement.
Use An Item
An item that is carried and readied can be used. The most common actions in this category are using or activating a magic item or piece of equipment. Such actions include, but are not limited to, drinking a potion, using a wand, casting a spell from a scroll, or casting a grappling hook. In most cases, no movement will be involved or allowed when using an item. Readying an item is not difficult, as long as it is easily accessed. Usually, the item must be on a belt or hanging from a pack, and readying it should not take more than a few seconds. Whereas, if an item is in a backpack, it would take at least a round to take off the pack, dig through it, and retrieve the item. The Castle Keeper and players must use common sense in deciding whether an item is readily available. In some cases, the Castle Keeper may require the players to indicate on their character sheets which items are readily available or how and where an item is being carried.


NON-LETHAL AND MULTIPLE ACTIONS
There is of course another broad category encompassing nonlethal or otherwise mundane actions such as talking, standing still and doing nothing or picking up an item. Such actions typically have no chance of failure, however, so they are not considered combat actions.
No matter the type of action attempted, it is up to the Castle Keeper to adjudicate how long any action takes and whether it can be performed in a single round. Most actions occur in a single round, or if they take longer, the rules for the specific action usually detail just how many rounds the action takes to complete. The Castle Keeper may allow more than one action per round under special circumstances, for example, if a character has a haste spell cast on him. Also, some non-combat actions a character may take might not consume a full round. This latter aspect is important and the Castle Keeper must use common sense and reason to determine if an action takes a full round. Drawing a sword would not take a full round. Tossing someone an item may not take a full round. As a rule of thumb, simply think of how long such an action would take in real life. If it takes just a couple of seconds to perform a non-combat action, then the character should be allowed another action, be it combat or non-combat in nature. The Castle Keeper can, and on occasion should, impose an initiative penalty for some of these actions.