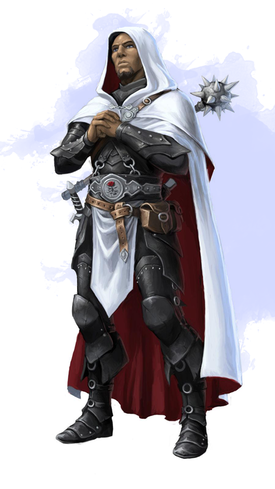 Prime Attribute: Wisdom
Overview:
Clerics are those individuals in religious service who have been chosen for special powers and responsibilities. From their deity, the cleric receives divine powers and act as conduits of the power of their deity upon the planes of men. Yet these powers come at a high cost in service, devotion and loyalty. A cleric is expected to both minister to the deity`s flock and to advance his deity`s interests in the world.  A cleric’s divine connection to a deity is of supreme importance. This spiritual connection allows them to better understand the motives and will of their deity and to more capably and earnestly enact the deity’s desire.
Deities can be of any ethos or morality: from good to evil, and from lawful to chaotic. All of the deities have priests and devotees who serve and worship them but the cleric is always of like mind and nature as the deity they worship. They never falter in carrying out their duties lest they face the most horrible of retribution and suffer the interminable revenge of an angered and betrayed power.
Clerics who generally act in ways opposed to their deity’s alignment and purposes, and who grossly violate the code of conduct expected by their deity, lose the use of all divine abilities and capacities for advancement, wandering alone and cursed until they atone for their wrongs.
Clerics tend to compromise 3 main classes:  a. clerics with strong combat resources but access to a limited range of spells, b. clerics with a medium access to both, and c. clerics with poor combat resources but a very large range of spells.  Strong combat resources means access to a wide range of weapons and armour.  Medium access may be limited in both or have a wide range in either weapons or armour but very limited in the other category.  Poor combat resources means very limited in both armour and weapons.  Likewise, a cleric who is limited in spells will have only a few domains with major (unlimited access) and a few other domains with minor access (up to 3rd level).  Wide access means major access to roughly 1/2 the domains and minor access to roughly the other1/2. Medium is in-between.  Access to spheres is determined by the cleric`s deity.
The choice of deity also determines additional powers . These powers usually come with a restriction/obligation/duty.   For example, a cleric granted additional healing powers may be obligated to heed a call for healing…  In addition, a cleric`s deity may gift him with a powerful quest spell in order to accomplish a major task beyond the usual powers of the cleric.  Finally, clerics are the only ones to use cooperative magic (where they can pool their magic power and/or tap into the power of the faithful).
A cleric may respect and even revere other (allied) deities.  They may even aid followers of other deities; if their patron deity approves.  However, only one deity holds the cleric's total loyalty and devotion.  There is no such thing as a cleric who serves multiple deities or one who has no deity.
ABILITIES
SPELLS:
A cleric casts divine spells. The spells available are listed on the cleric spell list. A cleric is limited to a certain number of spells of each spell level per day. The cleric is also limited in domains he can access and whether he has major or minor access to that domain.  The Cleric and Druid Spells Per Day Table shows the number of spells per day a character of the class may cast. Clerics prepare spells each day through prayer to their deity or deities, followed by contemplation and study.
BONUS SPELLS:
High wisdom indicates a greater divine connection. Clerics with a high wisdom gain bonus spells. If they have a wisdom of 13-15 or higher, they receive an extra 1st level spell. If the wisdom score is 16-17 or higher, they receive an extra 2nd level spell and if 18-19 or higher, an extra 3rd level spell. Bonus spells can only be acquired if the cleric is at a high enough level to cast them. Bonus spells are cumulative.
For example, a 4th level cleric with an 18 wisdom receives four 0 level spells, four 1st level spells and three 2nd level spells. No bonus 3rd level spell is acquired until the cleric reaches 5th level.
ADDITIONAL POWERS:
Deities often grant their clerics additional and unique powers in order to further the deity's aims/promote the deity's area of concern. For instance, an agricultural deity could grant the power to magically diagnose disease in crops and/or livestock.  Such gifts are expected to be used …  Besides the crucial goal of pleasing his deity, a cleric should also remember such acts are not only part of his greater responsibilities but often lead to possible allies or more devout followers of his god…   Which, if any, additional powers a cleric receives depends on his deity.

TURN UNDEAD (WISDOM):(not available to all clerics - see specific religions/deities)
A cleric has the ability to turn, or even destroy, undead monsters. To turn undead, a cleric must declare the attempt as an attack and then make a successful wisdom attribute check. The character must display a holy symbol toward the undead and utter a prayer, chant or other invocation of the character’s deity. Turn undead is considered a special attack and takes one round. Turn undead has a maximum range of 60 feet.
Turning undead consists of channelling divine power. The ability to channel divine power is measured by the cleric’s own willpower. Accordingly, charisma, not wisdom, affects the number of undead creatures that are turned with a successful turn undead check. In most cases, the number of undead turned will be 1d12 plus the cleric’s charisma modifier. When a cleric is five or more levels higher than the undead being turned, the undead are instead destroyed.
Evil clerics may, instead of turning undead, control them. An evil cleric must be at least five levels higher than the hit dice of the undead sought to be controlled. Evil clerics can also turn paladins.
Turn undead is covered in greater detail in Turning Undead.
QUEST SPELLS:
The followers of a deity may face a challenge to their deity's area of concern that is far beyond the powers of their priesthood.  In that case, a deity may grant an especially devout, wise (17+ wisdom), and experienced (10+, preferably 12th level or more) priest a spell beyond anything normally accessible to a mortal.  After an extensive ritual, the deity may grant such a spell to deal with the crisis.  That one spell occupies all of the priest's spell slots for the highest level spells he can cast (e.g. a 13th level cleric is unable to memorize/cast any 6th level spells while on this mission).  The spell can solve the specific issue (such as extinguishing a vast forest fire for a nature deity) but does not solve related issues (it does not kill off the army of orcs that torched the forest).
COOPERATIVE MAGIC:
Priests can utilize two types of cooperative magic.  The first are ``cooperative spells`` where two or more priests of the same religion cast a cooperative spell (such as ``Combine``).  The spell`s effect or power is increased depending on the level and number of priests involved.  The second group is the area of ``Faith Magic``.  Faith magic also increases a spell`s duration, area, effect… but requires much more ceremony and ritual than Cooperative spells.  However, Faith magic can draw power from faithful followers (less power/person) and priests (more power/person).  It is most effective when it focuses on a specific object or place and is renewed often by the devotion of the faithful in that spot. An example would be the efforts to ward a location or secure good harvests… Of course, for either of these forms of cooperative magic, a priest would need very good standing within the clergy of his religion and an equally good reputation with the faithful followers.  Clever priests will also notice that the larger the following and clergy for their deity, the greater the chance and power to exercise this powerful type of magic.
WEAPON SELECTION:
The cleric is only allowed to use certain weapons. This selection depends on the deity worshiped.
PRIME ATTRIBUTE: Wisdom
HIT DICE: Depends on deity d4-d10
ALIGNMENT: Any
WEAPONS: Depends on deity
ARMOR: Depends on deity
ABILITIES: Spells, turn undead,additional abilities/powers depend on deity.