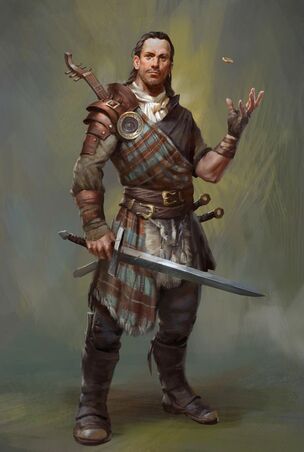 Prime Attribute: Charisma
Overview of Bards
Bards are the consummate 'people persons'.  While other character classes, such as Paladins, may depend upon their charisma for an aspect of their character; the Bard's entire character revolves around her ability to relate to people.  People trust Paladins and Knights and will follow them into battle; but they are still followers.  A Bard will inspire a person from the 'inside-out'; convincing him he is heroic and that his deeds will matter to both him, his community, and his descendants.  Also, a Bard will find out far more about a community and its inhabitants than any other character; he knows who to ask, how to ask, what to ask, and how to listen carefully. Taking all those pieces together, a Bard is able to tease out information unavailable to others and to use it.  A Bard's stories or songs can sway communities or even nations.

Of course, it is a 2-way relationship.  Bards became Bards because they love to entertain.  They not only find it easy to entertain people; but it is a necessity as well.  Bards enjoy being the center of attention.  Bards are a group that genuinely enjoy their work.  However, they expect to be paid and to enjoy the other fringe benefits that come from a certain style and a way with people.
Bards are attracted to adventuring parties.  Such a group is not only a wonderful opportunity to travel and see new places, but also a rich source of stories and renown.  While a Bard can attract more attention at times then an adventuring party may desire, the Bard's talents far outweigh any such minor inconveniences.  Bards are able to inspire their companions.  In addition, they are a wealth of knowledge and have the skills to find out additional information.  Plus, as noted earlier, Bards are the uncontested master class at negotiations, assessing and altering social situations and NPCs, and negotiating favourable deals and rates for the Party.  Finally, the Bard is a valuable addition in her own right.  Minstrels or Gleemen have all the before mentioned Bard skills plus very respectable fighting skills and a few rogue skills thrown in as well.  Troubadours or Jongleurs also have the same Bard skills as their Minstrel counterparts.  However, these Bards have magical abilities and can cast literal spells with their performances.  Such talents come at a cost of their weaker fighting skills than the Minstrels and a lack of rogue skills.


Overview of Minstrels/Gleemen: (note: the rest of the information on this page applies to Minstrels/Gleemen only - see the Troubadour page for specific information on that Bard class).
While Minstrels are sometimes referred to as "Low Bards", they are not better nor worse than troubadours, just different.  Minstrels tend to be the entertainers of the common folk where they can be found entertaining audiences in bars, inns, camps, … anywhere where people gather.  They enjoy interacting with their audiences - from taking requests, trading riddles, and using their knowledge about the audience to personalize the performance.  Typically a minstrel will perform for 1 night to a couple of weeks before moving on - partly to have fresh audiences but also to satisfy the minstrel's urge to wander and find new adventure.

With such an independent and dangerous lifestyle, it is no surprise that minstrels are quite capable of looking after themselves.  There are few situations that a minstrel cannot talk or charm her way out of; however, if talk fails, a minstrel is both an impressive fighter and also adept at quietly getting out of town. Minstrels often have a checkered past and boyhood friends who became rogues.  Other minstrels have found the ability to climb  out of windows or to move silently down hallways useful not only for romantic encounters but to also avoid any possible violent consequences of a rhyme the crowd found funny - but the local lord was decidedly not amused …  A keen ear is a must for a musician gathering new material.  Lastly, most minstrels can juggle and perform sleight of hand tricks to warm up an audience.  While these talents could be put to more dishonest uses, minstrels tend to avoid troubles with the law or smears on the minstrel's reputation.  After all, a minstrel prefers to be a very public figure.  Minstrels not only like to talk and sing about heroes, each minstrel fancies himself as a key figure in the next heroic epic - composed and sung by the minstrel himself.
Adventuring parties find the minstrel a very useful person to have along on an adventure.  The minstrel has the very useful people skills common to all Bards.  In addition, the minstrel's performance can enhance the morale or even the skills of his companions.  Finally, minstrels can hold their own in a fight and have some useful scouting skills.