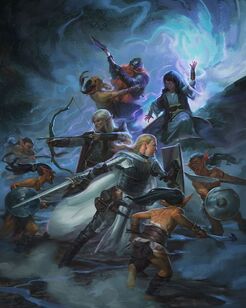 Summary: Details:
The order of action in a combat round is determined by an initiative roll. Every creature or character participating in the combat round rolls a d10 to determine their initiative each round. The roll is then modified, if necessary, by relevant conditions that would affect reaction speed (e.g. if the creature or character is hampered in his/her ability to move). Those with the highest score take their action first, and the actions of others descend from there. In the case of a tie, the one with the highest dexterity goes first. In the case of equal dexterity, a simultaneous action occurs.
This method of establishing initiative may seem chaotic at times, especially with large groups of creatures or characters. In those cases, the Castle Keeper may find it necessary to require a group initiative instead, with the winning party acting before anyone in the opponent party.
There is one exception to initiative: when a creature uses a weapon with a reach of greater than 10 feet against an opponent with a weapon with less than a 6 foot reach, or when a large creature is fighting a medium or smaller sized creature. In the first round only, the creature with the longer reach or larger size is allowed to attack first, even if the creature with the shorter reach or smaller size won the initiative roll. This rule only applies if the creature with the shorter reach or smaller creature approaches within ten feet. Such action counts as the action for that round for the larger creature or the one with the longer weapon.
Example:
For example, Hambone the halfling draws his short sword and charges a gnarly stone giant who just crushed his companion with a mighty oaken club. Screaming in a rage driven by revenge and loss, Hambone leaps forward to attack. Hambone rolls a 9 initiative, and the stone giant rolls a 3. The stone giant is large and Hambone is small. Thus, when Hambone moves within 10 feet of the stone giant, the stone giant is allowed to swing first even though Hambone won initiative. The stone giant, mirthless and fearless, sweeps his club around aiming at Hambone’s head. Hambone ducks and dodges as he charges, and the stone giant’s massive club glances off Hambone’s shoulder, but inflicts no damage. Hambone manages to move in close and slices at the stone giant’s leg, slashing a deep gash.


Some Standard Modifiers to Initiative

Other modifiers are available - use common sense.  In short, you want to set up the situation for an encounter where your side's ability to act is enhanced while your enemy's ability is hindered (see the below examples for inspiration).


*This applies to situations in which the party is in a completely different environment (swimming under- water without the aid of a ring of free action, for example).
# Waiting:  Sometimes when you encounter another group, you don’t know what you should do. You don’t want to attack them in case they are friendly, but you don’t want to say anything to provoke them. What you can do is wait and see how they react. Waiting is a perfectly sensible option. However, there is the risk that in waiting, you lose the advantage should the other side suddenly decide to attack. Waiting for a reaction so that you can decide what to do causes a -1 penalty to the first initiative roll for your group, if the other side attacks.


Note: Everyone in the party who will be involved in the round’s action must qualify for the modifier. For example, all members of a party must be on higher ground than the opposition in order to get the higher ground modifier. The DM will probably ask each player where his character is standing in order to clarify this.


The side with the highest modified roll on 1d10 has the initiative and acts first.